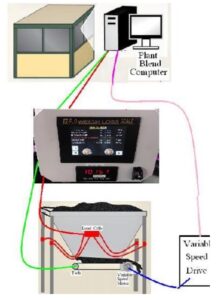 The system boots up showing the Run Screen.
Scale Rate is the depleting weight calculated over 20 seconds or so and is updated with a new Rate
Calculation every 2 second or so. The Weigh Loss Scale compares the Scale Rate with the Volumetric
Rate. The Weigh Loss Scale Control adjust the tach frequency from the bin to the Blend control to what
the frequency should gravimetrically be. By adjusting the feedback loop of the Blend Control, the Blend
Control is forced to correct for any density changes in the product being delivered. This in turn improves
the accuracy of the material amount being added. The Run Screen shows the Tach IN frequency from
the bin different from the Tach Out to the Blend Control. The Tach Out is adjusted by the Ratio of the
Scale to Volumetric reading times the Tach In. 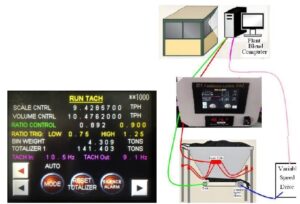 The Feeder has been on for some time in the picture below. The Scale Rate is Green (2 seconds-Shown
in Green Box) meaning the Weigh Controller is now imposing a Weigh Correction on what the Blend 4
Control (BC...Plant Computer RAS Closed Loop control) normally sees. This Weigh Correction affects the
Volumetric Tach Frequency (Tach Out) that the BC is expecting. The Ratio calculated is multiplied by the
Volumetric Rate (Tach IN) that the BC normally sees. The Tach Out signal from the weigh controller is
lower in this case and therefore BC increases the Feeder Speed until the BC has adjusted to the imposed
new scale frequency (held for about 2 seconds). When the BC settles out during the 2 second Green
Scale Rate to BC, this Scale/Volumetric Ratio Frequency adjustment is maintained for 60 seconds or so.
The Ratio Control is now Green for 60 seconds ...Scale to Volumetric Control Timer) and deviates only
if the BC TACH IN to the Weigh Loss controller changes.

So once again, The Scale Rate is Green for about 2 seconds, just long enough for theBC- VFD-MotorTach to normally respond to the adjusted frequency to the BC. Then this corrected freqency is held long
enough, about 60 seconds, for the Weigh Controller to recalculate the currrent situation and pass the
frequency changes through the Weigh Controller. These frequency changes actually reflect the setpoint
changes the BC wants to make . The Ratio turns green during this 60 second period.

Notice the VOLUME RATE and is green and the Tach IN and Tach OUT are equal. The Weigh controller is
in a state that just passes the tach frequency back to the BC as if the Weigh controller was not in the
feedback loop.
The Simulate Screen is used for testing and instructional purposes. The Weigh Controller defaults to the
Run Screen upon power up. The Volume is Green, therefore the BC is controlling from the Tach. Notice
Tach IN = Tach OUT.

Above; Notice the Scale to Volume Ratio is only . 805 which means the material is less dense or the bin is
bridging or running empty. The yellow Ratio Control value .805 on the right refers to the Ratio Trig: Low
and High values that force the Weigh Controller into Volume Control should the Yellow Ratio Value
exceed the Low or High Limits. When Ratio values swing so excessive, the Weigh controller becomes
unstable. Volume Control is stable and this fail safe action triggers the sequential starting of the cycling
between Scale Control and Ratio Control.
Below; Notice the Tach In and Tach Out. The Scale/Volume Ratio is adjusting the Tach Signal to the BC
to reflect what is actually (gravimetrically) coming out of the bin instead of the Volumetric assumption. 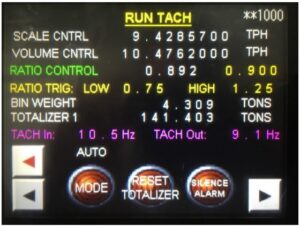 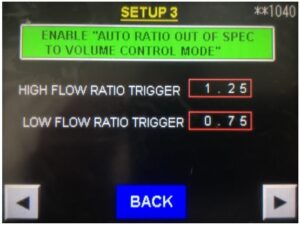 The 60 second Green Volume Control is used in 2 different instances. 1) To establish what the the

calculated Volume Rate is with Scale Rate upon startup and 2) is deferred to when the difference in rate
between the Scale and Volume becomes excessive. Regarding 2: When the Ratio exceeds the outer
limits of .75 or so and 1.25 or so, the Ratio Trigger sets off a) an audible alarm and b) the event is
recorded and the Weigh Controller passes the frequency from the Tach to the BC for the Volume Rate
60 seconds as it does during normal start up as discussed in 1) above. 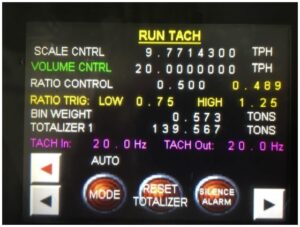 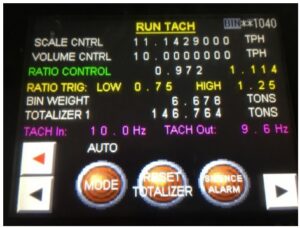 Upon startup.. The Weigh Controller is in Volume Control while the Weigh Control is developing a
calculated Rate. If material is flowing out at a rate outside the Ratio Trigger setpoints, the Weigh
Controller will remain in Volume Control until the Low or High Ratio Trigger alarm is not active. Once
the Trigger alarm is deactivated, sequential cycling of Control modes shall be enabled.
Totalizers.. 1,2,3.. For various reasons, one may want to know how much material was done each day,
each job and maybe annually. 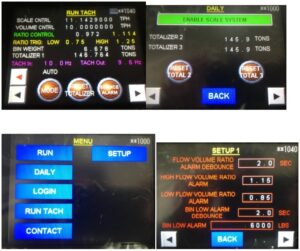 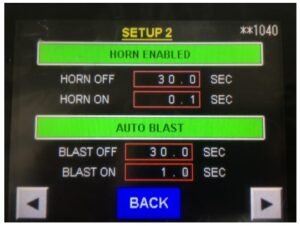 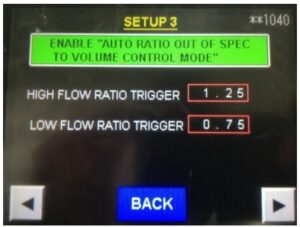 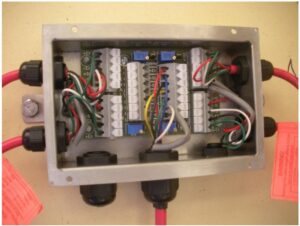 Loads Cell Summing Box Wiring. Four Load Cells wired to terminals at the far right and left. Scale
Indicator Cable wired to Terminals in the center. Pay attn to this cable wire color scheme as it illustrates
how to wire correctly to the terminals. 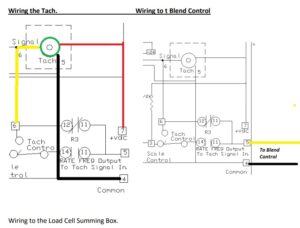 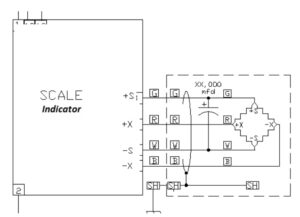 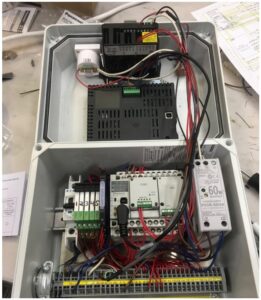