You are here: Home / How to Control Dust During Production 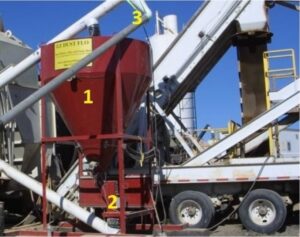 The father-son team of Lloyd and Jason Vivant ran the plant for McNamara Contracting in Rosemount, Minnesota, 25 years ago. Lloyd wanted to control the amount of dust going back to his mix evenly and reject the difference. He set up a system to do just that.

Today, the system design still works well for Jay. The size of the bin has increased to take on unwashed material. The savings from not washing material is threefold:

Because the minus 200 dust product may vary excessively at times, this can be an ideal opportunity to reject the excess. Let’s look at how you might do this at your facility.

The aggregate drying process inherently separates the fines from the on-spec material. When air velocity changes, whether that’s due to production, moisture or temperature variations, through the dryer, so does the size and amount of fines separated. Consequently, the loading of the baghouse changes and so does the amount of dust returned.

Complicating the issue further is the baghouse discharging the dust in sags and surges, which can be as high as plus or minus 21% over a three-minute period. Adding insult to injury, the hot stops allow the bags to relax when the fan is turned off causing most of the dust to fall and fill the auger below. When the plant is started again, the dryer initially sees the full auger surge (+59%).

Because the bags had released most of their dust, the augers run empty until the bags build up the dust cake again. This situation then causes the dust to go from the surge to a sag (-59%) until it slowly builds up the dust cake over a five-minute period.

There are some basic steps the plant operator must execute to ensure he isn’t chasing ghosts and is getting the correct fines metered back to the drum. Let’s look at those steps. 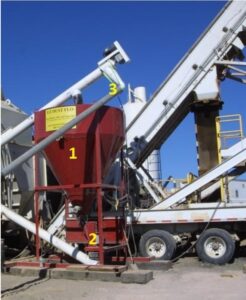 These systems usually are added as a retrofit. The gray vertical picture below shows the controlling device to be regulated by the plant blending control by what is passing through the scale below. Owners should specify the control scheme they want their blend control to respond to. The author suggests the procedure below to get the full benefit from the new equipment. Remember, the control mode position switch has three options: feed/reject; sag/surge; and manual. 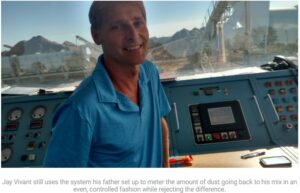 In Mode 1, the dust bin with an auger dust spillover, the discharge port is used to automatically reject what the vane feeder does not take away (i.e., the dust the plant does not use as a percentage of dust being added to the mix). The vane feeder is controlled by the plant blending computer in a closed-loop PID type control to setpoint percentage of material delivered to the drum as measured by the rate of flow through the continuous weigh scale. If this mode is selected and the percentage is set too high, some of the sags and surges will pass through. Upon hot start, the blending control should “remember” what the speed was when hot stopped and held for preset time for major surge-sag to pass and then release to PID control. (Upon hot stop, the bags usually release much of the dust held up in bags when fan airflow is stopped, and this fills the bottom augers. It will take the bags another baghouse cycle time to recharge the bags.)

In Mode 3, the operator adjusts the speed as he sees fit. Unfortunately, operators usually set the vane feeder to keep the bin near empty, which defeats the purpose of all this equipment. For controlling surges, set the speed so the bin does not run empty and minimizes the time the bin is rejecting. When rejecting, feed the plant what it needs and everything else takes care of itself.

Dust should be controlled as closely as cold feed bins, and in some cases more closely. This is a great system to improve your mix quality.