You are here: Home / Impact Flow Meter Controls the Uncontrollable

Consider for a moment that your quality control (QC) team has perfected a mix design for a state project. Everything is seamless from the aggregate to the binder to the percentage of RAP. The test strip your paving crew placed on the back lot gave beautiful compaction numbers. Then the department of transportation quality assurance inspector ran a test and your air voids were all wrong. Your crew paved an extra test strip and couldn’t get density to save their lives. What on earth went wrong? Jeremy Dade is the plants manager for Elam Construction in Grand Junction, Colo., and told a similar story. “We’d either have too much 200s in the mix or not enough.” It took more than a year of trial and error to realize the problem came from the baghouse fines. “We even turned the baghouse return off,” Dade said. Nothing seemed to give them a consistent result. Instead, they saw a big swing of 1.2 to 1.7 tons per hour (TPH) in the 200s, Dade said.

By installing a device from Clarence Richard Co. that weighs and meters the dust going into the drum, the plant personnel slowed the rate to a steady 4.2 TPH, according to Dade. Elam Construction personnel had found a problem with the sags and surges in the baghouse’s normal operation. A typical pulse-jet baghouse has about 64 rows of 10 to 15 bags that pulse three rows at a time on a timer. The dust that falls to the bottom of the baghouse gets augered out in surges, thus the fines returning to the drum move in surges. This gives varying amounts of fines in your mix design. A rotary air baghouse could be considered “worse” as it can stop sending material for up to a minute at a time. But a plant operator can’t blame the baghouse. It’s operating as it was intended. “The primary purpose of the baghouse is for emission or pollution control from the plant process, Some contractors over the years have used the baghouse hopper as a temporary holding device to feed the fines to the plant. Most producers today have much more sophisticated feeding and metering devices to properly proportion the dust/fines back to the material feeding and mixing operation.”

David Fife, the QC manager for Elam Construction, spelled out his experience in detail. “There are many aspects as to how dust effects mix designs,” Fife began. “I can remember standing next to a hot plant several years ago with a Colorado Department of Transportation (CDOT) inspector trying to figure out why the properties of the mixture where fluctuating. I hadn’t been making changes in the percentages of materials at the hot plant, and we religiously had run crusher control on the aggregates as they had been manufactured. I told the inspector that I was chasing ghosts. Every time I had my fingers on the problem it would disappear and show up again on the other side of the specification. “At that time I had a pretty good idea this problem was based on dust but I couldn’t put my finger on exactly why it was appearing then disappearing without changes at the plant,” Fife continued. “I had run enough gradations on the stockpiles to know the crushing or inconsistent materials did not create the problem. Over the next several years, through trial and error I found it was not a ghost; it was fluctuation in the dust being returned to the mixture via the Baghouse.

“To sum up the problem, a dust feeder that is allowing the dust to be returned into the mixture in sags and surges is creating a mixture that does not have a constant demand for oil. In other words, when excessive dust is being pumped into the mixture the Voids in Mineral Aggregate (VMA) is generally decreased, creating less room in the mixture for oil. When the dust is being starved in the mixture, the VMA generally is increased creating a mixture with more room for oil. With the VMA floating around, a mixture with a varying demand for oil is being created. “The hot plant has no way to track the problem, and continues to add consistent oil. With the percent oil staying the same and a changing VMA, the voids fluctuate with the changing VMA. As a result to the fluctuation in the mixture’s voids, the crews in the field are continually adjusting the roller patterns to achieve the required density. After all, density is just a measurement of in place voids. This problem is often magnified by volumetric tests being produced by the testing department, and adjustments to the mixture being made based on sags or surges in the Baghouse. This custom dust runaround was built to prevent the surge of baghouse fines.

“As all of us in the asphalt industry have experienced, the key to producing quality asphalt mixtures is to be able to find the right combinations of materials, and consistently produce at these combinations. The search for consistency is easier created in the lab than produced in the field. We have many obstacles to overcome when attempting to recreate every ton exactly as the prescribed mix design calls for. A system that supplies a continuous flow of dust to the mixture helps overcome one of these obstacles,” Fife said. Fife is no longer chasing Ghosts. He now uses the Ez-Flo Continuous Weigh Control System with Solids Impact Flow Meter as manufactured by Clarence Richard Co. The scheme Elam used on their portable plants is significantly different than what Richard suggests for stationary plants. Surge control normally requires the addition of an auger and storage bin. Richard eliminates the need for a surge bin (silo) and associated auger for portable plants with a flow scale being fed by a variable feed auger. When in the dust rejecting mode, the dust surges move from feeding the mix process to feeding the reject pit while the amount of dust being returned to the mix is measured, controlled and fed evenly to the mixer.

The system doesn’t need a surge bin because sags and surges are eliminated by the use of the flow scale and large variable speed auger feeding the mixer. This saves on the purchase, setup and maintenance of the bin. Please take care that no body falls to their instant, unpleasant death if they fall into a full open pit.

The large volume auger substitutes the need for a bin. When the auger is adequately sized, the automatically operated auger can eliminate the sags by speeding up during the times the baghouse is not delivering enough dust. Elam Construction’s Dade operates the system differently depending on whether or not the job mix calls for dust to be rejected. If dust is not rejected, the surge elimination mode returns all the dust back into the mix evenly. In the end, Elam Construction mixes can remain consistent throughout production with metered and monitored fines introduction while the baghouse continues its proper and expected operation. This keeps the QC team and the paving team working with something they can rely on throughout production.

“To sum up the problem, a dust feeder that is allowing the dust to be returned into the mixture in sags and surges is creating a mixture that does not have a constant demand for oil.” —David Fife, QC Manager for Elam Construction

When surge bins are required, use what you want and reject the difference. When using all your dust, the bigger the bin, the more you can smooth out the larger surge-sag swings.. 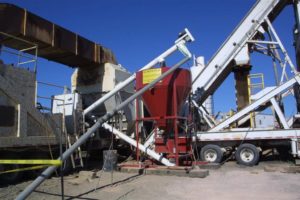 Here’s How with Solids Impact Flow Meter Works: Material slides down the EZ-Flo flow scale’s feed throat and impacts a suspended plate (Impact Plate). The material impact force on the plate is transferred to a load cell, which converts the gravimetric force to digits on the readout. It displays both the flow rate in tons per hour (pounds per minute, etc.) and the tons of material that has passed through the scale since the totalizer was last zeroed. 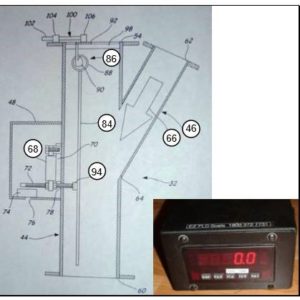