Recycled Asphalt Shingle Weighing Applications get a boost from continuous weighing. No matter what you call it, Solids Impact Flow Meter or Dry Flow Meter or Impact Plate or Mass Flow Meter, Ez-Flo Scales gets the job done. 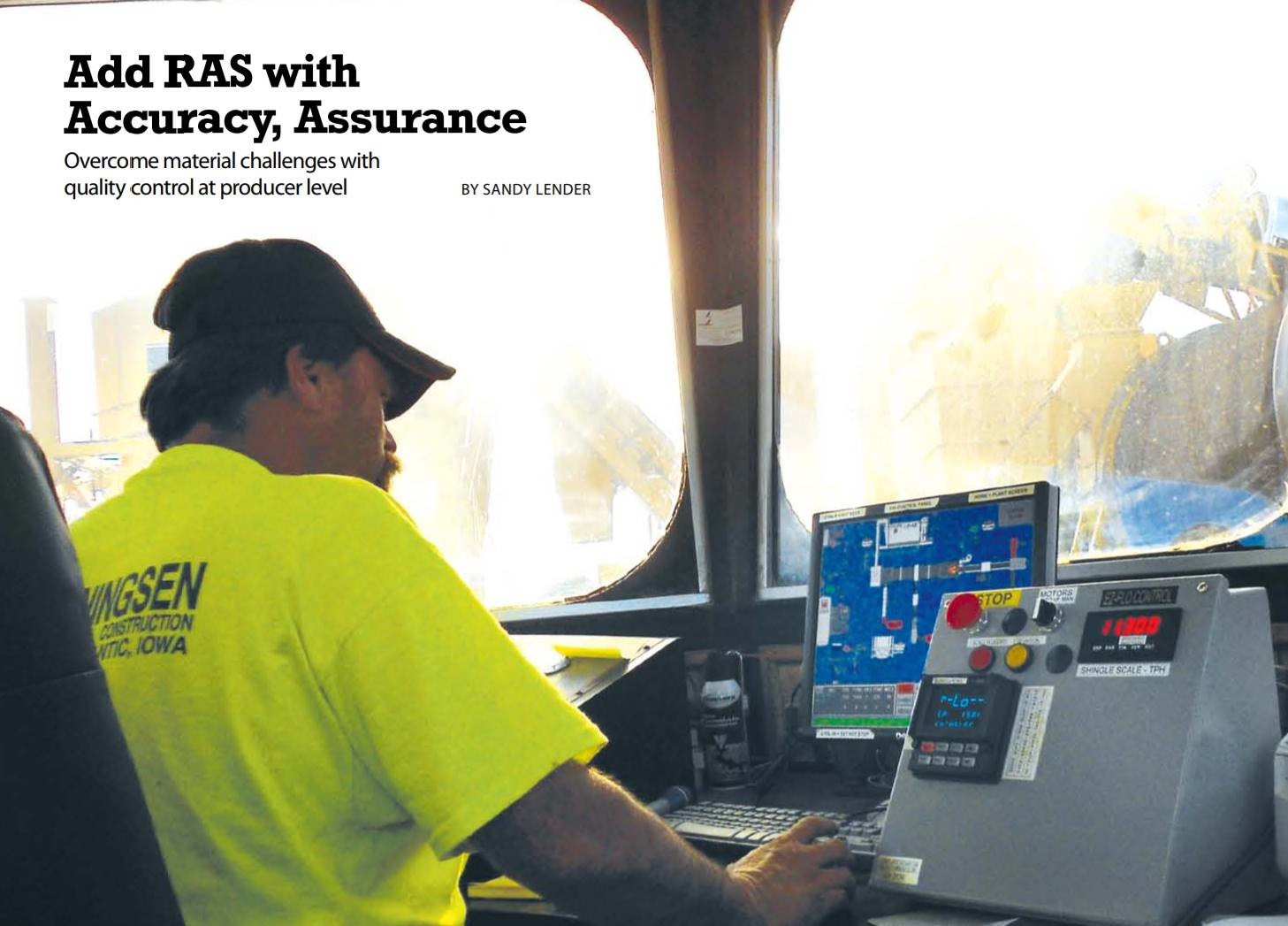 If you wish to trim asphalt cement (AC) costs while keeping waste material out of landfills, you’ve probably looked into the recycled asphalt shingle (RAS) availability in your area. With the quality control (QC) issues of bringing in clean RAS and having it ground to the finest size you can get, you may have run into the challenge of weighing that material accurately throughout the mix design and mix production phases. Not to worry. Producers in the field have met with some challenges when it comes to handling RAS and they have tips and advice to help their peers ensure a quality mix for customers, owners and agencies. Let’s begin looking at this topic by addressing some of the QC aspects to watch for when working with a finely ground recycle material such as RAS. First, remember that the amount of recycled AC you get out of RAP is a different percentage than what you get out of RAS. Even the amount of AC in RAS can vary from 15 to 35+ percent. That means your plant operator has much to track when it’s time to produce mix with recycle in it. Of course plant manufacturers and controls OEMs are part of the solution.

“Initially, it’s very important to know the difference between excess manufacturing tabs on the one hand and recycled shingles from a roof tear-off on the other hand. These two types of shingles must be handled, fed, metered, proportioned and blended in different ways. For example, your RAP bin is separate from your RAS bin. If that’s the case, shouldn’t you also separate never-used shingles from worn-out shingles?” The big question producers in the Midwest have asked of Clarence Richard, proprietor of Clarence Richard Co., Hopkins, Minn., concerns measuring what comes out of the separate bins. What he discovered in working to resolve their measuring issue was an accuracy issue. Quality control of RAS needs a delicate touch. “Most producers are trying to weigh RAS using the existing RAP feeder system that they have without making any improvements,” Richard said. “There are a few reasons that producers will want to update existing equipment for RAS.

First, RAS carries a lot of AC in it. When accuracy is off, the AC content is affected by the error more than when RAP’s accuracy is off.” Richard’s second observance should encourage producers to look not only at multiple bin use for multiple products, as proponents of fractionated RAP have said for years, but also to look at multiple scales that the control house can read. His third should encourage producers to look at equipment shape. “Second, sometimes producers use multiple bins in series with a RAP s with RAP in one of the bins and RAS in another,” Richard continued. “They can’t be sure how much is coming out of either bin at any given time. The RAP conveyor was built for heavier TPH flow rates (25 to 125 TPH) of RAP productions. Current RAS rates require weighing product from 5 to 25 TPH. That’s a big difference. The RAP scale system (conveyor included) was not built to accurately weigh material at such a low flow rate. “Third, when you have multiple bins in series with a RAP scale system, there’s no way for the blending control to adjust for bin speed when one of the RAP bins or RAS bin clogs up, or density is changed. And density can change plus or minus 15 percent.

Some belt scale manufacturers advise against using their scale to weigh light-loaded products for such a critical application.” To address weighing RAS separately, Richard brought up the EZ-Flo continuous weigh flow scale (Impact Plate) that his company manufactures. To address flow and controls, a variety of sources discussed controls and equipment use. The Solids Impact Flow Meter from Clarence Richard Co. works much like a belt scale except it doesn’t need a tachometer. It already “knows” the speed of the material passing through it is constant—gravity. The flow scale reads the rate of material flow as it impacts the front face of the impact plate. The rate reading, in TPH, indicates how fast material is passing through the flow scale and produces an output signal useful for blending materials. The totalizer reading, in tons, is used for calibrating the scale, cross-checking accuracy, inventory control and producing a signal capable of batching product. The flow scale impact plate is mounted 6 inches away from the end of the belt feeder head pulley to measure the RAS flow rate. Dual recycle bins often mean the producer fractionates his RAP and treats it with the same care he treats virgin aggregate. That’s an excellent practice. When he decides to use one of the recycle bins for a much finer product like RAS, quality control management needs to take a step up.. Keep in mind that continuous weigh scales and metering instruments should be checked for accuracy. The accuracy of the check is only as good as the resolution of the instruments being used, the size of the sample and the sampling method. An 8-ton sample is gathered, which is better than a 4-ton sample. The procedure was to collect material in a truck after the material had traveled more than 100 feet of conveyor and through a scalping screen.

Clarence Richard suggests producers place a strip of conveyor belt or similar material alongside the EZ-Flo Dry Solids Flow Meters to prevent wind from affecting its delicate operation. Of course, you’ll want to add that encumbrance after you get the scale into this tight space.

Henningsen Plants Superintendent A.J. Dennis Campbell points out the installation of the EZ-Flo Solids Impact Flow Meter. A.J. Dennis Campbell, plants superintendent for Henningsen Construction, Atlantic, Iowa, shared that he had concerns when his company won a 60,000-ton job that required about 4 percent shingles. The job was in Iowa, but on the Illinois border, so two groups took an interest when Campbell gave the go-ahead for an EZ-Flo Solids Impact Flow Meter to be designed, built and delivered in four weeks. He wanted an accurate means of weighing RAS material as it discharged from the RAS feeder belt to the collector belt. The distance between the RAS feeder head pulley and the RAP tail pulley— and both of their support structures— is 20 inches. The distance between the bottom of the feeder belt and the center of the collector belt was 12 inches. The troughing rollers used up part of that 12-inch space. The RAP bins also have bin support structure and bin feeder conveyor drive pulley-sprocket arrangement on one side of the bin and the loader ramp barricading access to the confined space. That meant the team assembled the scale inside the confined space as much as possible. 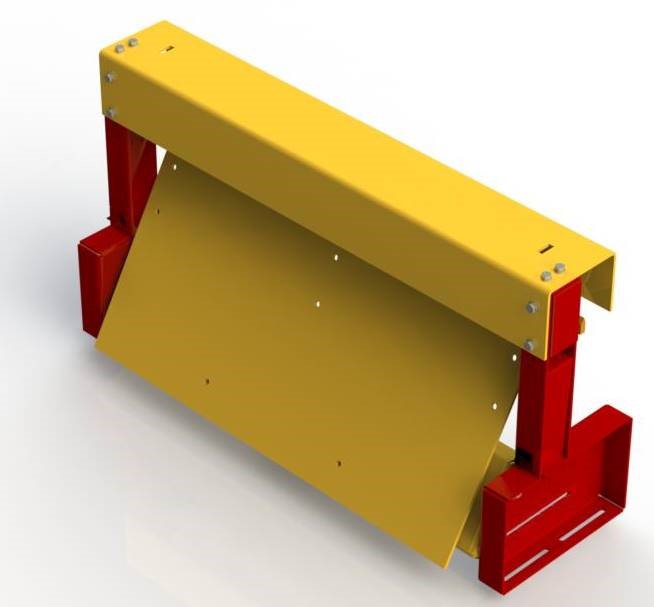 With the careful operation done, the EZ-Flo can be used at the Henningsen operation for fine RAP and RAS monitoring. An operator can slide the scale out of the flow when using the bin for RAP.  Henningsen Plant Manager Duane Updike observed flow rate changes during production with the EZ-Flo in place. The impact scale located in the control house reads in real time and would normally be monitored by the plant computer. “Plant computers are programmed to either compensate for the AC when the RAP scale deviates from a set point or to increase or decrease both feeder bin speeds,” Richard reminded us. “Either way, one scale is not enough.

Now, the mix producer has the option of weighing the RAS and controlling that bin or the AC being added to the mix. The same RAS rate signal being used to control for the RAS can be subtracted from the RAP belt scale—which is weighing both RAS and RAP—to indicate the actual RAP TPH flow rate.” This means the plant computer can use RAP deviation information to adjust the oil being added to the mix or the RAP feeder speed. “Contractors should give a heads up to their blending control manufacturers about the changing requirements they’re asking of their blending controls,” Richard said. “Today’s blending controls aren’t usually set up with the software to accept another scale input or two to monitor the flow with a continuous weigh RAS scale and, consequently, control the flow from that scale information.” That means it may be time to contact your controls OEM to get analog inputs for a new scale. Jim Richwine, director of engineering for Libra Systems, pointed out the importance of connecting new technology with new technology. “Most plant operators open the gate on RAP bins much wider than would normally be done for volumetric control. They do this to prevent bridging, but in the process, they hinder traditional volumetric control because the material is then not cut by the gate. Instead, the material pours from the bin and the amount produced by the bin for each revolution of its belt actually varies as the belt speed changes. So, the old-style control systems that used a single ‘pounds per tach pulse’ calibration for the bin became inaccurate at different speeds." Richard concurs  that multi-point calibration is better than single-point volumetric calibration, but he says that volumetric control of any type is unacceptable for RAS. The demonstration mentioned previously proved that RAS controlled volumetrically was wandering all over the map. “RAS density changes plus or minus 15 percent,” Richard reminded us. “Therefore the accuracy of weighing material volumetrically is plus or minus 15 percent.” Any QC manager can tell you what that range does to voids.